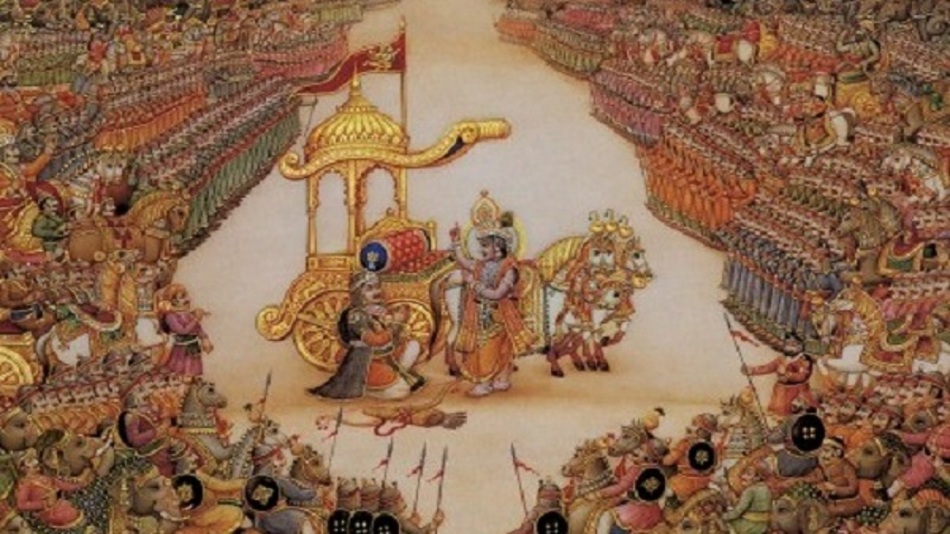 Throughout the course of history, man has always strived to attain some kind of perfection. He desired to live beyond the reach of ordinary stress and pain. To achieve this, he wished to know more about himself, the phenomenal world around him and the relation between the two. But major chunks of his experience with the surrounding phenomenal world yield him only pains. He stood helpless against the natural calamities and disasters. The repeated unpleasant experiences force him to think of a better world or existence, where none of the badness can affect him. He started his endeavors towards this direction. But, who all can attain this comfortable blissful state? Of course, everybody, irrespective of their deeds, cannot achieve this. Only the deserved can realize this supreme state. Many difficulties sprang up then. How to find out those who deserve or not deserve this comfortable perfect state in after-life? Karma Siddhanta provided the solution to this dilemma.

Karma Siddhanta put forward certain rules and guidelines to define actions into two categories – Good and Bad. These set of rules decided which action is good and which is bad. Vedas, Brahmanas, Upanishads, Bhagavat Gita, Smiritis, etc. were the commonly cited scriptures for a proper ethical and spiritual life. Guiding a life according to them, one can attain the perfect state of existence before or after death. Thus who performs the duties as propounded by the scriptures are sure to achieve moksha (roughly means, ‘liberation’), the perfect state, and who deviate from scriptural injections are destined to born again and again in the phenomenal world. Anyway he has to obey the injections of sacred scriptures to achieve the perfect state[1].

In this manner, the way to moksha or moksha-marga becomes the central point of focus for a believer. In Hinduism there are mainly four ways to Moksha as prescribed by scriptures. They are Karma, Jnana and Bhakti margas, representing the three periods of Hindu thought advancement. Patanjali’s Yoga system is the fourth way to moksha.

The first developed path to moksha (liberation) is Karma Marga. It is clearly described in detail in the Rigveda, Brahmana and smriti texts. Performance of the rituals and oblations regularly as suggested by the Vedas is the main duty of a moksha-aspirant in this system. Rigveda have prescribed many rituals and samskaras that should be performed in daily life and on certain auspicious occasions[2].

The strict performance of these rituals can yield liberation to the performer after death. Every other duty is supplementary and subordinate to the ‘ritual performance’; they cannot override the importance of ‘actions’. This priority, given to the ritual-performance, to attain moksha, is the fundamental theory of Karma-Marga.

While Karma Marga represents a period of much antiquity of Indian Culture and the beginning of Indian thought and speculation, ‘Jnana-Marga’ represent a very advanced and complex Indian thought. Jnana-Marga is mainly outlined in the Upanishads[3]. The near total rejection of the role of ritual based karma-marga, to attain moksha, is the rigid face of Upanishadic teaching. Upanishads propounds that acquirement of the knowledge about the ultimate reality is the only way to achieve moksha. Yet Upanishads not altogether rejects the importance of ritual based worship, very common in Rigvedic times, but assign a subordinate role to rituals under Jnana, claiming that rituals along with upasana or meditation can purify the aspirants mind and assist him in his quest to the ultimate truth, Brahman.

But the main theme that Upanishads advocates is jnana-marga only to achieve moksha or liberation. This simply means that acquiring the knowledge about the supreme reality (Brahman) can only lead devotee to moksha, thus avoiding further birth in Samsara. Karma and upasana can only pave way to this acquirement of knowledge and they themselves cannot lead anybody to moksha.

This dramatic shift in the mean to attain moksha is the clear sign of a reform happened in the Hinduism in ancient time. Such a dynamic character of religion shows its flexibility to configure itself according to the needs of the changing time period. In Upanishads many kshatriya teachers and kings, like Janaka, also comes to the forefront of philosophical debates, which shows that philosophy was not a monopoly of any particular sects at that time.

However a complete switching from karma-marga to jnana-marga did not happen. Certain conservative factions continue to adhere to the teachings of the Vedas and went on with the practice of rituals and adopted karma-marga as the way to moksha. Upanishads also did not try to nullify the Rigvedic teachings and accepted the authority of Vedas. In later times, the Purva-Mimamsa branch of Indian Philosophy became the protagonists of the ritual worship and karma-marga.

This is the most popular path to moksha and easy to follow[4]. The aspirants of moksha neither bound to do many rituals on a daily basis nor need to grasp the philosophical knowledge about the ultimate truth, which is difficult to comprehend for lay devotees. In bhakti-marga the aspirant only need to worship the Saguna Brahman or more commonly called, Isvara. Do an unconditional surrender to Isvara by worshipping him by bhajans, etc and gain moksha. It is He who selects, who all (normally an ardent devotee) deserve moksha. Devotees live perfectly with proper ethics as mentioned in the scriptures.

Thus Isvara, the supreme personal god, gives moksha to devotees, having ardent devotion towards him. This is the core of Bhakti Marga.

Jnana and Bhakti marga are closely interrelated. An elaborate bhakti tradition came out from Jnana tradition to increase the religiosity of it. In Advaita Vedanta (Jnana marga tradition) individual self or atman is same as supreme self or Brahman. There is no distinction between them. Individual self is the reflection of supreme self in avidya[5], like moon reflecting in water. When avidya is removed from the individual, he came to realize that he himself is Brahman. Then onwards there won’t be any subject – object classification. All that exists, including him, is Brahman only[6]. If all that what is Brahman, then the room for worship is null because the nirguna brahman is impersonal, without attribute. So jnana marga lacks colorful religiosity in ultimate level. Also jnana-marga is a kind of philosophical approach to the highest reality, which is not an apt way for the common man. They found it difficult to conceive the idea of Nirguna Brahman.

To overcome this, Ramanujacharya established Visistadvaita. In this, Individual self is a part of supreme self, Brahman. After attaining moksha via bhakti, this individual self will not merge with supreme self. In this system worship is possible because the supreme self is a personal god here, having attributes. Thus the Jnana and Bhakti Marga are interrelated to each other.

Svetāsvatara Upanishad contains a famous hymn that proves the meditation practice as a way to realize the supreme bliss. It runs as follows.

“We should hold our body with its three erect parts quite even, and that we should pen our mind, along with our senses, in the heart. We should concentrate upon Brahman, and, with the help of that boat cross all the fearful streams that bar our spiritual progress. Controlling our breath and with our actions quite measured, we should throw out by the nose our Prana when it becomes quite exhausted in the process of inspiration, and we should regulate our mind which is like a chariot to which are yoked very evil horses. We should sit for the practice of Yoga on an even and pure piece of ground which is free from pebbles, fire, and sand, and which is also free from sounds and watery resorts. The place where we sit for practice should be delightful to the mind, and not jarring to the eye; and we should choose for practice a place in the still recesses of a cave.”

The practice of Yoga was also a discipline to attain Samādhi, in which yoga practitioner attains Brahman realization. This trend was more popular in later Vedanta period. The meaning of Yoga is ‘to unite’ and it is interpreted as the union of individual soul with the supreme soul, Brahman. The practical methods that Yoga developed are aimed at this direction.

Yoga proposes eight disciplines for the students of Yoga. They are Yama, Niyama, Āsana (body posture), Prānāyāma (breath control), Pratyāhāra (withdrawal of self), Dhāranā (concentration), Dhyāna (meditation) and Samādhi (absorption). Through the practice of these eight steps a Yoga student can control his senses, mind, ego and finally he attain Samādhi, where he enjoys bliss of Brahman.

These are the four ways to Moksha as developed by Ancient Indians. Since Hinduism is dynamic, any enlighten Yogi can develop and propagate a new path to Moksha which is in line with Vedic teachings.

[1] This can be a comfortable state of existence in phenomenal level or in transcendental level, which is beyond the realm of senses. Only a Yogi can know the transcendental state. ‘Jivanmukta’ is a person who attained Moksha in this life. He is not destined to born again after his death. He is fully outside Samsara. But as his Prarabda Karma won’t be exhausted by the Jivanmukti state, he has to bear the ‘Phalas/fruits’ of it, in his remaining life. A Jivanmukta after attaining Moksha, does Karmas in the day to day life such as service to others. But all such karmas will be Nishkama Karmas (Karma devoid of desire) and so won’t bind him to the Samsara again.

[2]  Performance of the rituals, as prescribed by scriptures, deposits an unseen potency in the doer. It is called ‘Apurva’. It can bring fruits of doers karmas after his death.

[3] By any conservative measurement, the beginning of Upanishadic Period can be dated around 1500 BCE. JM Kenoyer, the eminent archaeologist of Indus valley, in his new article mentions that writing in Indus Valley started as early as 3500  – 3300 BCE. (Ref: http://archive.archaeology.org/9909/newsbriefs/indus.html . Accessed on 13-01-2015). Then start of Rigveda can be pushed back to minimum 3500 BC. The self evolved Indus Valley civilization is Post-Vedic as commented by Nicolas Kazanas. Ref: Indo Aryan origin and other Vedic issues, Aditya Prakashan, Delhi. The name “Harappa’ is supposed to be mentioned in Rigveda as ‘Hariyupiya’ in RV: 06.27.5.

At Hariyupiya he smote the vanguard of the Vrcivans, and the rear fled freighted.”

[4]  The origin of Bhakti starts from Rigveda itself. Many of the hymns to Varuna, the king of devas, and the wielder of Rta the supreme law, are filled with Bhakti elements. (Give example).

[5]  Avidya can be anything that creats duality feeling in us. It is also said to the effect of Maya, the cause. (Write more if not written elsewhere)

0 comments on “Article 3 – The Different Ways To Moksha”