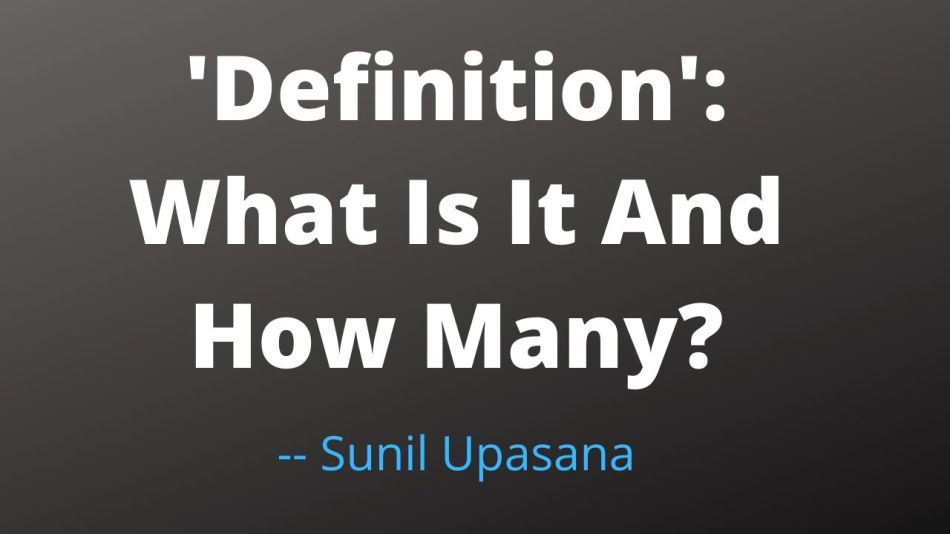 Very simply, we can say that, ‘Definition’ is a simple description about a particular object. Usually when we describe a external object, we usually refer to its properties, form and usage, mainly. In Indian philosophy, the meaning of the term (/ process) ‘Definition’ is very peculiar. We must understand its inner meanings to properly comprehend Indian philosophical teachings.

Let us consider the common definitions about the objects in the experiential world.

As said before, when we describe an external object, we usually refer to its properties, form and usage. But these kind, Descriptive Definitions have a major drawback. That is, these definitions change continuously. Why they change? Because, everything in the experiential world are undergoing changes continuously (1). Depending on time and place, worldly objects change at different rate and proportion. This will cause changes in, at least, some properties of the objects, thereby, forcing us to again Define (redefine) the objects. Thus these definitions change continuously.

Permanency Characteristic Of The Term ‘Definition’: –

Apart from the definitions that undergo changes frequently, we have to check, whether there is anything that can be defined permanently! Because, the term ‘Definition’ by default, indicates something constant. An ‘unchanging characteristic’ is always ingrained in ‘Definition’. Redefining an object, which underwent some changes after the previous/first definition, of course, did not make sense. Because, here ‘definition’ has the value of only a ‘Statement’.

When the meaning of Definition becomes like that of ‘statements’, about a particular topic, at different points in time, then, ‘definition’ will become essence-less. At this point, there won’t be any difference between ‘definition’ and ‘statement’. This should not be the case, because definition bear the tone of constancy in us. Continuously changing definition is not ‘definition’ at all.

Those definition, which will remain same forever, can be considered as ‘Ultimate Definition’. They will never subject to change, depending on time and place.

So… which object or substance can be defined ultimately? Since everything in this experiential world continuously change, we cannot define them ultimately. We can define them only relatively. Then, that, what we can define ultimately, will of course be a transcendental reality.

In various Indian philosophical schools, there are Relative and Ultimate definitions. More details will be given in another article.

(1) According to various Indian philosophical systems, everything in the external, experiential world are in a state of flux. Buddha said that, ‘no one can put foot on same river’. Thus Indian schools equates experiential world as changing endlessly and so, if we clung to it thinking they are REAL, they will cause sorrow.

1 comment on “Definition — What Is Its Meaning In Indian Philosophy”